After traveling from the MN airport to O’Hare and hanging out for a few hours, then a few more in Stockholm, we got to Milan around 1 pm local time. Knowing we would have 15 plus hours of travel behind us (and my general crabbiness), we booked a car service to take us from the airport instead of trying to figure out the local trains or buses for the hour transit between the airport and our hotel.

With the exception of losing my favorite pair of sunglasses (RIP-free-black framed-promo-swag gift glasses), our first bit of travel went without a hitch and we stayed for a few nights at The Yard Hotel in Milan. The Yard is a boutique type of hotel with limited rooms, but a fun atmosphere. They greeted us with a few drinks and we tried our best to look cool after the long trip, but eventually had to go to the room and relax for a while before continuing our adventure.

Italy Travel Tip #1: Don’t order a cappuccino after noon. While delicious and a great pick-up after travel, the wait staff will at minimum roll their eyes, and at maximum outright refuse to serve it. We actually talked to another couple from the U.S. and can confirm they were refused and offered another option.

Like most major European cities, Milan has an enormous history to it with many stories to tell. Knowing we only had 36 hours to explore, we planned ahead and visited a few key locations based off of Steph’s terrific ability to plan ahead.

Our most well-known stop was the Duomo De Milano, or the Milan Cathedral for us Yanks. This church was under construction for NEARLY 600 years, starting in the 1300’s and finally considered finished in the 1960’s. It is the third largest church in the entire world, and largest in Italy as St. Peter’s Basilica is technically in Vatican City (spoiler: we went there too). 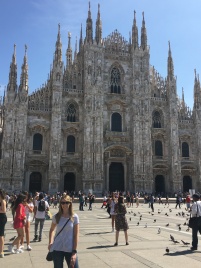 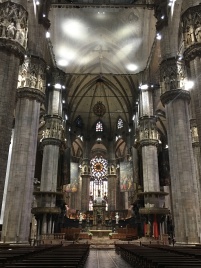 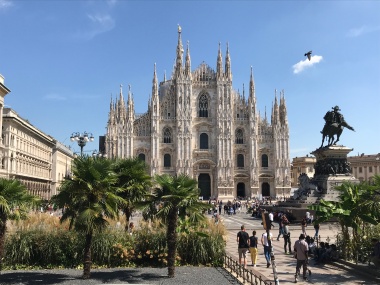 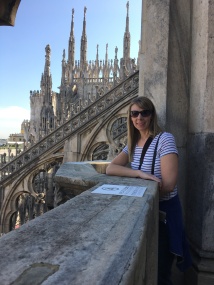 Make sure to check out some of these photos, most specifically the ones of St. Bartholomew and the replica of the Madonna in Bronze. The Madonna is a bronze replica identical to one on the churches spire. It is said that if you gaze upon her you should feel relieved and take that feeling with you the rest of your days.

For those of you not familiar with St. Bartholomew, he was one of Jesus’ apostles who was later flayed (read: skinned alive) and beheaded for spreading Christianity. The wrapping you see on him in this photo, in paintings and on this statue is not, in fact, a robe but his removed skin. You see, he was kinda a bad-ass.

Our second main stop was the Sforza Castle, near the very center of Milan. Built and rebuilt, (and is the theme in Italy) built furthermore on during the 14th and 15th centuries, it is now a civic museum. While much of the museum was fun to see, its most important piece is that of Michelangelo’s final and only recognized unfinished sculpture. It is said he worked on it for the final 10 years of his life until he died in 1564.

The Rondanini Pietà, is a statue of the Virgin Mary holding the body of Jesus done in marble. Having not seen a marble statue unfinished, it was amazing to see all the initial carvings done with a chisel and the uneven marks still throughout the piece. Seeing the difference from the rough texture of the rock to the well buffed and shine of what was complete was an experience. Also, because it was late in the day we didn’t have to wait in line or be blocked by other onlookers, so we could really experience the piece that much more.

And finally, my favorite piece of art from the whole trip. Nothing speaks to my soul like L.O.V.E.  . You should click the link to learn more, but set directly in the financial district, the subject matter likely does not escape you. 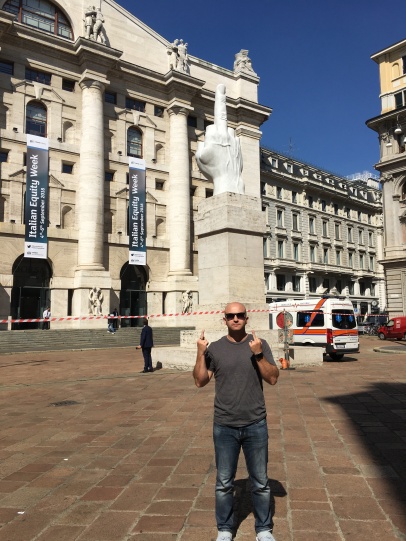 More posts to come, thanks for reading!